What the heck do you do with a mini-quilt?

I signed up for the mini quilt swap last month  at Modify Tradition(great blog!) and just finished. The guidelines were for a traditional quilt with modern fabric and NO wonkiness.  Let me assure you that any wonkiness was completely unintentional!   Bought some yummy fabrics and this is the result....

What I used: to die for echino,  michael miller, and amy butler( If you live in NoCO and haven't been to Mama Said Sew on E. Mountain Ave. in Old Town, Fort Collins, get there as fast as you can!  Awesome!) 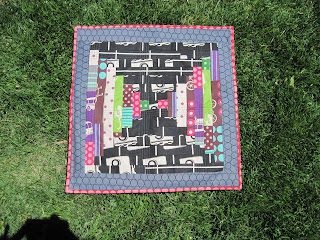 What I learned:  I'm a crappy quilter!  This was my third attempt and I'm realizing, stick with what you know!   I can't even maintain an even 1/4"seam when sewing strips!  Ugh! 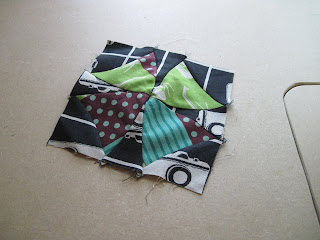 I've been enamored with the winding ways quilts since I read Jennifer Chiaverini's book of the same name(great series,that![I just read a British chick lit book, can you tell?]).   With fabric like the echino--rather heavy linen-like--the seams were so bulky that it didn't have a prayer of lying flat!  So that will be turned into a pin cushion. 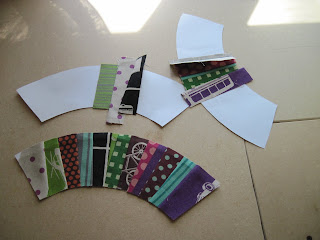 My next try was a double wedding ring, paper peiced.  Well, I don't know how to do that!  A goodly amount of wasted(I''ll figure out something for it!) fabric later, courthouse steps fit the bill.

After I finished, I realized I had made a quilt like this before using a Wonderland honey bun, not realizing it had a name--just thinking I was tweaking a log cabin. I guess what's true for cooking is the same for quilting--there's just not much that hasn't already been done!

So after all that--I love it!  I couldn't stop looking at it last night after I got the binding sewn on!

As to the title of my post....my answer to that question is to give it an envelope back and give the option of a fantastic pillow.  It could still hang on a wall or sit on a table, but I'm really happy with it as a pillow-mini-quilt!  Hope my partner likes it!

There's a meeting of the Fort Collins Modern Quilt Guild on Thursday, May 27 at  Half Moon Bay Coffee Co in Fort Collins from 5:30-8.  I'm hoping to make it--I think April was it's first month.

Have a great weekend!  And we still have room for 8 more quilter's at the retreat in November with
crazy mom quilts!
Posted by Tara at 1:59 PM 13 comments:

Who knew?  Let me tell you--I was beyond overwhelmed by  the response to this giveaway!  Thanks to all who stopped in and many thanks to the 101 new followers and the 40 original followers that make me feel like someone wants to hear about my crafty nonsense!

I read each and every of the 526 comments and kept my husband updated too.  When the comments were in the 280s I told him how excited I was and he wanted to know(again) why there was this much traffic.  And then with a look of sheer panic, wanted to know how many bags I had to make!

I wish I could make one for each of you, but all in good time!

Edited to add:  The giveaway will close at midnight mtn std time!!  so you've got 4 more hours!

Welcome to Tinkerfrog!  I am happy to be participating in Sew Mama Sew's May Giveaway Day!  Once you've registered for this giveaway, make sure you head over there for the literally hundereds of giveaways going on! 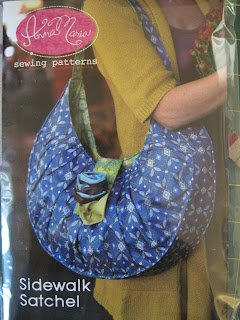 I'll be making someone lucky this beautiful bag in the color of their choice!  We have a big selection of Amy Butler Love at my LQS, Mama Said Sew, and I'll be happy to go pick some up for the winner!


To enter, just leave me a comment with your favorite colors.  To gain an extra entry, become a follower and leave me a separate comment.  Make sure your profile allows an e-mail address to be seen, otherwise I have no way of reaching you!  The giveaway is open until May 20th and the drawing will be random.  Some extra prizes might be thrown in, too!

Thanks for stopping by!

Life is crazy and every time I plan on posting I don't get it done--I'm gonna turn over a new leaf here and make a concerted effort to post more often!

So, firstly(love that word!), we have another amazing retreat planned at the Inn with the incredible Amanda Jean Nyberg, aka crazymomquilts.  If you were lucky enough to join us last year, you know how much fun we had--and this year shall be even better!!!  The dates are November 12-14, 2010 so think hard but not too long!.

Only 8 more spots available and only two more rooms at the inn! 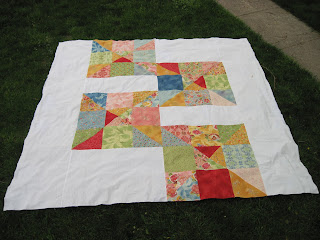 Here's a quilt that I've been working on for my 11 year old niece Becca.  She has her own blog and it always makes me smile.  I used a layer cake of Boutique by Chez Moi for moda.  It was an experiment--now I realize why you don't make a nine patch, slice it diagonally into quarters and sew it back together.  A few truncated corners and slightly odd shaped blocks later, I decided it worked anyway!  I mean, what was I going to do, throw away $35.00 worth of fabric?

It measures about 80 x 80 and it'll go on her full size antique iron bed(the one I grew up with!). I still need to piece the back and quilt it.  I'm more than nervous about the quilting as it's over twice as large as anything I've machine quilted, and I can't say that any of those looked great.  But practice makes perfect(or at least passable) and I've got to start somewhere because I'm not paying someone else to do it as that would eat up my fabric budget for about 6 months!

I'll also be participating in the Sew Mama Sew May giveaway day next month, so be sure to come back and see what fabulous prize I will be giving away!!  I'm sure I'll come up with something good in the next few days!
Posted by Tara at 3:09 PM 5 comments: